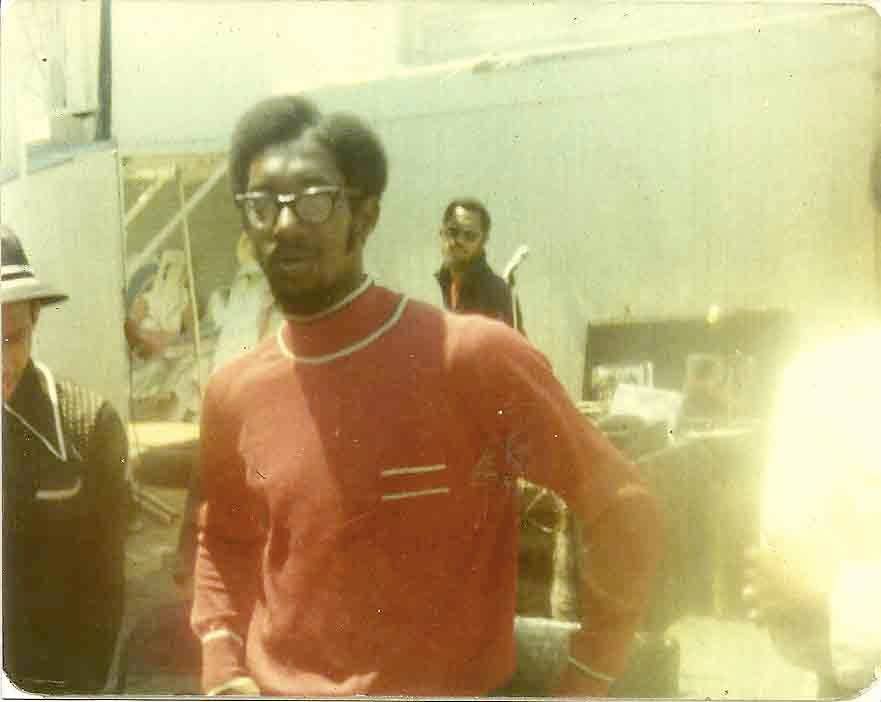 Coke La Rock was born April 24, 1955 on the east side of the Bronx between Union and Prospect Street.[1] His grandparents had a strong hand in raising him since his single mother was busy working six days a week.[2] At age 15, he attended high school at a night center where he met a fellow classmate named Clive Campbell (later known as DJ Kool Herc).[3] The two would soon come together and begin a movement called Hip Hop with their legendary parties in the Bronx.

On August 11, 1973, a “Back To School Jam” was held in the recreation room of 1520 Sedgwick Avenue for Herc’s sister, Cindy.[4]  Simple handwritten index cards were passed out as flyers, and tickets quickly sold out due to word of mouth.[5] Many believe that this renowned event marked the first time an MC rapped over a DJ’s set.[6]  Wearing brand new Adidas pants with a fresh haircut, Coke La Rock began shouting out his friends on the microphone while Kool Herc played “breaks” (the standout sections of songs that got the crowd dancing).[7]   La Rock’s style of talking over beats has been often compared to the Jamaican tradition of “toasting” which is defined as “the act of talking or chanting, usually in a monotone melody, over a rhythm or beat by a deejay.”[8]  Though he often improvised his lyrics and did not record his material, he is credited with being Hip Hop’s first MC ever.[9]

It wasn’t until his fifth or sixth party that he came up with his stage name “Coke La Rock” after dreaming about dealing cocaine in Mexico.[10]  Though La Rock had attended church every Sunday growing up, he had made a profitable life for himself selling marijuana and heroin throughout his neighborhood.[11] He remembers making around $1200 to $1700 off of drug sales at a good party and even getting offered money to shout out fellow drug dealers and their product on the microphone.[12]

By 1975, Coke La Rock had become a prominent MC.[13] Small clubs like the Black Door, Ecstasy Garage, Harlem World and the Disco Fever (used in the 1985 film Krush Groove) soon opened and became popular throughout the city.[14]  The Bronx soon became known as “The Boogie Down Bronx” or just “The Boogie Down” while Kool Herc and Coke La Rock gained fame.[15]  Though partygoers attended these clubs to experience new music and have a good time, fights would often erupt amongst the crowd.[16]  Unfortunately, in 1977, DJ Kool Herc was stabbed by a member of the Executive Playhouse crew at a club called The Sparkle.[17]  After seeing the dangers of violence in Hip Hop,Coke La Rockdecided to get out of the rap game in 1979 and focus on raising his son, Dante.[18]

In 2008, he finally recorded his first song entitled “Hello – Merry Christmas Baby!” for a Sedgwick and Cedar holiday compilation, and he was inducted into the Counterculture Hall of Fame at the 23rd High Times Cannabis Cup in 2010.[19]  Though his career was very short-lived, his legacy as the first rapper will live on, and he will continue to be credited for laying down the foundation for all future MCs.

Also originated phrases “You rock and you don’t stop,” and “Hotel, motel, you don’t tell, we won’t tell” (which was immortalized on the first Sugarhill Gang single “Rapper’s Delight” although he received no credit).

“There’s no story that can’t be told

No horse that can’t be rode

No bull can’t be stopped

And ain’t a disco we can’t rock”

“If a Freak is unique

Then that’s the freak you seek

Then I guess before you go

The freak will be on the bo

As long as the music is not stopping

The rocks are dropping

The champagne is flowing

The freaks will be going