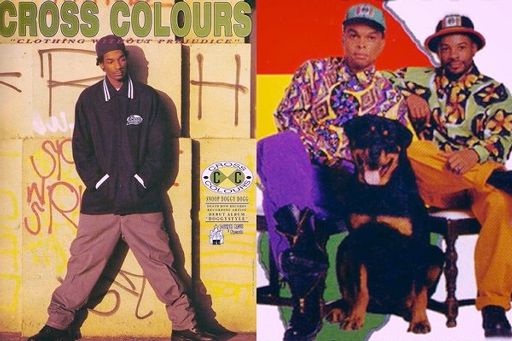 When Carl Jones entered the fashion world in 1989, his concept was different than most. His goal was to create a reputable clothing line but he also wanted to bring forth a message that would break social prejudices.  His aspiration was to rupture the color lines with garments that had messages to elevate the mind of his consumers. And with the inception of Cross Colours, he produced a clothing brand that stood for a message far greater than just t-shirts.

A native of Watts, Carl Jones obtained his immense experience from studying fashion at the prestigious Otis Parson’s School of Design and Trade Tech schools in California. Although he was passionate about the fashion world, he eventually dropped out.  He started his own silk-screen printing firm in which he obtained major clients like Guess. In 1985, he along with several partners, created Surf Fetish that looked to combine beachwear to the urban streets but he felt disengaged soon after. From there, Carl walked away and embarked on a new mission. He wanted to capitalize on the Afrocentric movement that was sweeping Hip Hop but his focus would be mens apparel instead of the typical womens fashion. Outside of that, Jones wanted to create a clothing line that broke social and political norms. He longed for the unity of individuals to reach through garments and stretch farther than just the bonds of side seams.

Carl got to work and brought on TJ Walker, who worked with him on Surf Fetish, to create Cross Colours. They put together affordable hats and t-shirts that had positive slogans like “Educate 2 Elevate“ and Clothing without Prejudice.” They implemented eccentric colors that spoke to a world that was fresh and modern. The array of shades had internal messages far beyond the wearer’s generation that allowed Carl and TJ to market Cross Colours in a different light.

In 1989, the two headed to the famous MAGIC trade show that turned out to be a great move. People loved the designs and not soon after, the orders were coming in back to back. After securing funding, the company began showing up in Macy’s and Oaktree stores across the country. Some retailers were hesitant as Cross Colours was more about pushing a message that some felt would alienate some consumers. Nevertheless, the brand along with the message proved to be one that everyone appreciated.

Cross Colours took off quickly and soon became popular amongst the Hip Hop community. Some say the company had an overnight success story but it took eight years to fully get off the ground. Eventually, the demand for the designs skyrocketed as Jones expanded to its biggest customer and retailer, Merry-Go-Round, which was a 950-store clothing chain that was very popular among teens.

In addition, many emcees started wearing Cross Colours. Big Daddy Kane, Queen Latifah and Kriss Kross all rocked the “clothes with the message” thus propelling the brand to the forefront of urban fashions. The company expanded by offering a “Classics” line promoted by Magic Johnson but not before they faced a few bumps in the road that led to even greater ones.

Spike Lee, who was a former client, filed suit against Cross Colours over the usage of slogans that were similar to several mottos he was known for. Eventually, the company settled out of court and changed their name to Threads 4 Life.  Also, the skeletons lurking in the closets of the successful Merry-Go-Round chain shockingly came to a head. And out of nowhere, the company filed for Chapter 11 bankruptcy hurting the Cross Colours brand tremendously. Without the basic source of revenue from the Merry-Go-Round retailers, the brand quickly became a sinking ship.  The Cross Colours product that was sold in more than 50% of “M-G-R” stores was no more.

From there, Cross Colours started showing up less and less on the emcees and young urban kids that helped with its success. And companies like Karl Kani, which was a part of the Threads 4 Life family, took over. Eventually another company acquired the trademark and the Cross Colours brand was able to stay afloat. Although it was no longer at the forefront of the Hip Hop fashion world, it continued to exist stateside and abroad.

Despite its setbacks, Cross Colours is still dubbed the “original label of urban fashion.” The company also helped jump-start the careers of fashion legend, Karl Kani and employed June Ambrose, who’s also become a fashion guru. Although the company seemed to have a short existence, it helped catapult the careers of several Hip Hop artists and enhanced the social message behind their music. The brand expanded the artist’s individuality and altered some of the attitudes surrounding Hip Hop. The early success of Cross Colours does not remain to present day but the unity of the brand still reaches far beyond placing a t-shirt on one’s back. With the influence of Carl Jones:  “We are colorful”, “We are harmony,” “We are the stars” and “We write history,” will continue to be the multicultural slogan for a lifetime.