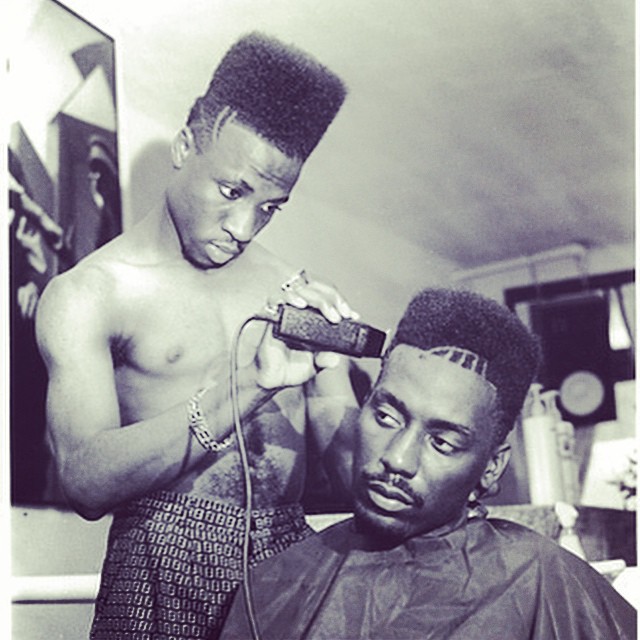 Since the early part of the twentieth century, African-Americans expressed themselves through hairstyles that seemed to go hand and hand with the music and culture of the times. The Afro (the natural) was symbolic to the Black Power Movement that lasted from the late sixties to the early eighties and served as a mark of freedom and revolution. Like other cultural movements, Hip Hop followed suit in the eighties as it was starting to come into its own and define itself through everything from music to language

One of the first hairstyles that helped distinguish Hip Hop as a culture that would impact the world was the Hi-Top Fade. Although it emerged in the mid-eighties, some speculate the hairstyle was inspired by Queen Nefertiti’s Empress headpiece.  Rather there is any truth to that remains indefinite but popular culture has always been known to gather inspiration from history. And it seemed as though history was repeating itself because in 1980, actress and model Grace Jones, was one of the first to wear the hairstyle on the cover of her album, Weather Leatherette. During that time, many emcees were still sporting the Jheri-Curl but not soon after, the Hi-Top Fade transitioned its way into becoming Hip Hop’s first adopted hairstyle.

The Hi-Top Fade was a low cut hairstyle, in which the bottom half and sides of one’s head was shaven closer than the top, thus giving birth to the term “fade.” Rappers Doug E. Fresh and Schoolly D were some of the first to be spotted with the hairstyle in addition to Salt N’ Pepa’s back up dancers in their video for their single, “Tramp.” Initially, the style wasn’t very defined until later years, in which it became more flamboyant and expressive when artists like Big Daddy Kane and Heavy D and the Boyz appeared with a more geometrically style. These acts helped to propel the Hi-Top Fade to be known as the signature hairstyle of Hip Hop.

Throughout the eighties, many emcees from Rakim to MC Serch sported the hairstyle. And by the close of the decade, many Puerto Rican and African-American men were also wearing the fade. R&B acts like Bobby Brown and Guy also helped to popularize more stylish fades such as the “Gumby” and the “Step Fade”.  The Gumby was a slope like style that Bobby Brown popularized while the Step Fade was different layers cut into the hair to create the illusion of steps. Another popular style was a blonde colored patch at the forefront of the Hi-Top worn by Kwame or the almost wet look that Teddy Riley rocked. Many emcees had unique styles but the most recognizable of all the fades was Kid (Kid N’ Play), whose Hi-Top reached upwards of six-inches, which became his signature.

In addition, the Hi-Top Fade could be formed into various sub-styles as well. Some people would get words written in the back of their fades, while others would get three-dimensional designs carved into their cut. From three-dimensional Gucci “G’s” to names, numbers and images, some men got extremely creative. Other variations of the popular hairstyle also came on the scene as individuals began to grow twisty knots and braids in their fades.

The Hi-Top became so popular that it eventually carried over to the mainstream. Everyone from athletes, actors to news reporters had the hairstyle. It remained a popular fixture on the urban scene for years but began to die down towards the mid-nineties as braids and Caesars were making their way into the culture. Nevertheless, the Hi-Top Fade will always be Hip Hop’ first defining hairstyle and a classic symbol of the golden era.